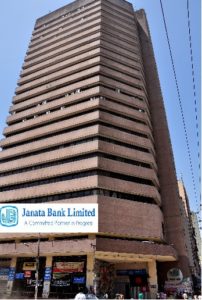 Janata Bank Limited is a state owned Commercial Bank of Bangladesh which was established after the liberation war of 1971.Before the independence of Bangladesh a number of banks previously operated in this region but in order to rebuild the country’s economy from merging those banks made a new banks led to formation of Janata Bank in 1972.

Under the nationalization order 1972, the erstwhile United Bank Limited and Union Bank Limited had been Combined In 1972. On 15 November 2007, Janata Bank introduced as a public Limited Company when the bank acquired registered with the Join Stock Registrars. The vision of this bank is to become the effective leading commercial bank in Bangladesh to provide socio-economic growth of the country and want to be a prominent bank in South Asia.

The mission of this bank is to maintain a steady growth process, distributing high quality commercial products, providing admirable client service through a skilled management team and resultant good commercial authority in every stage of banking network.