In Islam, “predestination” is the usual English language rendering of a belief that Sunni Muslims call al-qaḍaʾ wal qadar. Muslims believe that the divine destiny is when God wrote down in the Preserved Tablet (al-lawh al-mahfooz) all that has happened and will happen, which will come to pass as written.

What is predestined in Islam?
Al-Qadr is the Muslim belief that Allah has decided everything that will happen in the world and in people’s lives, which is also called predestination. Most Muslims believe that humans cannot choose to do something if Allah has not already chosen that path for them.
What is my thought about predestination?

Qadar is one of the aspects of aqidah. Muslims believe that the divine destiny is when God wrote down in the Preserved Tablet (al-lawh al-mahfooz) (several other spellings are used for this in English) all that has happened and will happen, which will come to pass as written. According to this belief, a person’s action is not caused by what is written in the preserved tablet, but rather the action is written in the tablet because God already knows all occurrences without the restrictions of time.

On the other hand, the causal relationships are also part of Qadar, since human acts affect what is stated in the Preserved Tablet. The phrase reflects a Muslim doctrine that Allah has measured out the span of every person’s life, their lot of good or ill fortune, and the fruits of their efforts.Again Allah does not need to force anyone to do good or evil by interfering with his will, and nobody will bear witness that Allah did so. When referring to the future, Muslims frequently qualify any predictions of what will come to pass with the phrase Insha’Allah, Arabic for “if God willed [it].” The phrase recognizes that human knowledge of the future is limited and that all that may or may not come to pass is under the control and knowledge of God.

The Preserved Tablet. Reports say that Al-Lawh al-Mahfuz was the first thing to be created and is preserved in Bayt al-Ma`mur directly under the  Arsh, in the seventh heaven. It is of length 100 years. Before creating anything else Allah ordered the Pen (the second creation) to write. It asked what it was to write. It was told, “All that is going to be.” (According to other reports, “Write down My knowledge, about My creations, until the Day of Judgment”). So it wrote down all that was to be on the Lawh al-Mahfuz. Thus, there is not a single thing that is to happen, or it will be, small or big, is written down in the Lawh al-Mahfuz, exactly qualified and quantified along with details of when and where it will be and when it will be destroyed. No change can take place in what is written, unless Allah wills, who has the power to erase. It is reported of `Umar ibn al-Khattab that he used to say, “My Lord. If You have written me among the fortunate ones (the Su`ada’), then affirm it. But if You have written me among the wretched ones (the Ashqiya’), then erase it.” The Qur’an said (13: 39): “Allah erases what He will, or confirms. And with Him is the Mother of the Book.”

The Lawh al-Mahfuz is also known as Umm al-Kitab (Mother of the Books), accordingly, whenever the Qur’an said, “in the Book”, the allusion is to the Lawh al-Mahfuz. The Qur’an was there in it before being sent down to Bayt al-`Izzah, from which it was sent down piece-meal to the Prophet in 23 years. 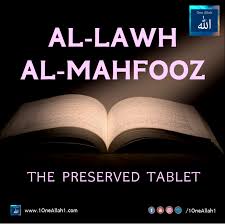 We know that all details of our lives are pre-recorded in al-Lawh al-Mahfuz. Then what is written by the angels in the 4th month in the womb and annually on laylatul-qadr?

Firstly, if something is authentically established in the Qur’an and Sunnah regarding the actions of Allah, who are we to question what Allah does and why He does it? We should simply say:

Secondly, the scholars have mentioned that each writing of qadr is a detailed version of the original writing in the al-Lawh al-Mahfuz, and in that is evidence of Allah’s perfect and eternal knowledge, power and wisdom.

That which is in al-Lawh al-Mahfooz can never be changed. The Prophet (ﷺ) said: “The pens have been lifted and the pages have dried.” Narrated and classed as Saheeh by al-Tirmidhi (2516). As for the pages which are in the hands of the angels (not from al-Lawh al-Mahfuz), Allah may command His angels to change it because of an act of worship that a Muslim does or because of a sin that he commits, but in the end, it will not be anything other than that which was decreed from eternity. This is indicated by the verse in which Allah says:

And Ibn Katheer says in the Tafseer of Allah’s statement:

“It means that on laylatul-qadr, the decrees are transferred from al-Lawh al-Mahfuz to the (angelic) scribes who write down the decrees of the coming year including life span, provision and what will happen until the end of the year. This was narrated from Ibn `Umar, Mujahid, Abu Malik, Al-Dahhak and others among the Salaf.” (Tafseer Ibn Katheer)

The Prophet (ﷺ) urged us to do some acts of worship which have an effect of increasing a person’s lifespan, such as upholding ties of kinship, and he said that dua can repel the divine decree (Jami’ Al-Tirmidhi). What this means is that Allah knew from the beginning that His slave would do this act of worship, so He decreed for him a long life or a blessed provision, and on the contrary a person may commit a sin because of which he is deprived of provision, and Allah knew that and decreed it from eternity and decreed it according to His knowledge. Allah does not compel anyone to obey Him or disobey Him.

The Prophet (ﷺ) summed this up in one hadith: “Nothing increases one’s lifespan except righteousness and nothing repels the Divine decree except dua, and a man may be deprived of the provision by a sin that he commits.” Classed as Saheeh by al-Albaani in Saheeh Ibn Maajah.